Rewards:
2005 – 23th Memorial of Nadežda Petrović in Čačak, Serbia – Reward of the
Memorial and Reward of the audience || 2008 – Grand-Prix of the 9th International Biennial of Miniature Art in Gornji Milanovac, Serbia || 2009. – Politika Reward, for visual art and the exhibition « Cut », Serbia. 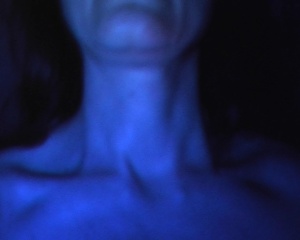 Since 1999 I am working on video installations and environments, exploring unconsciousness, dreams, psychological processes as well as archetypal symbols. Experimenting with different projection-surfaces and screens I am undertaking an examination of real and virtual space locating the observers specific positions.

A thin line of separation between our inner psychological space and the visible one, can often mislead us and make us believe more firmly in external happenings, excluding our internal space, where our spirit and energy, consciousness, emotions, intuition belong. Inbetween our inner space and the space that surrounds us, we can think of natural forces and laws, functioning principles of the Matter, invisible happenings on the sensitive border between substance and energy, where life is conceived and its spirit maintained.

I attempt to transform and materialize the inner theatre from mental screen to the outer space, so that the observer is provided with a complex territory to question the relationship to his own subconsciousness.